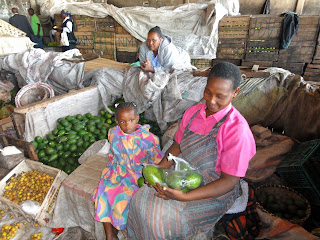 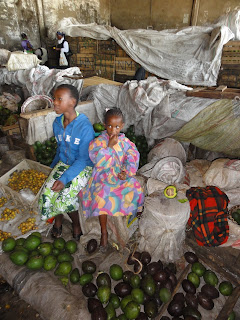 Lucy Gikonyo is a mother of four. She joined the program at the beginning of the year.  She took a loan of $100 to add stock to her business. Through the proceeds she generates from the business, she contributes a part of it to the family budget … for which she takes great pride! (Avocados for ten cents!)


She looks forward to growing her business to a level of a wholesaler, since she will be earning more. “This can only happen when I get sufficient capital which I believe Farming Systems Kenya (FSK) will provide,” says Lucy. 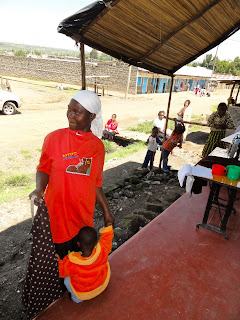 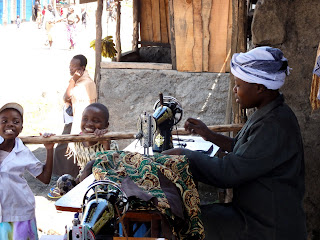 Stephen Ochieng is married with a one-year old girl. He started with a small business of selling sugarcane near a Primary school in Ponda Mali (a slum). This was the only source of income for the family. With his first loan of $50 (used to add stock) he generated profits that helped him start a greengrocer business for his wife. The wife was happy because she was contributing to the family budget.
Stephen and his wife are also tailors (Mrs. Ochieng, above pic in red shirt), but could not use their skills because they lacked capital.  With a loan of $150 they were able to purchase two sewing machines. He repaid this loan within a shorter period than allotted because he combined both incomes from his sugarcane business and the green grocers income.
He then qualified for a third loan of $300, with which he started a tailoring shop where he and his wife are not only selling clothes, but is also training others. (Sorry: Stephen was off working elsewhere so no pic of him.) 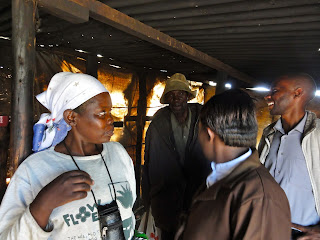 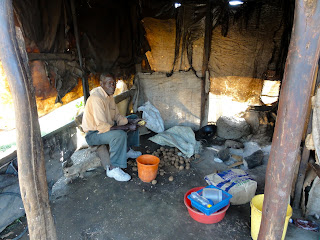 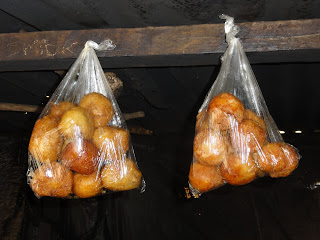 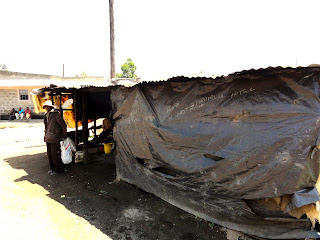 Beatrice is a wife and mother of 8 children. Because her husband recently had a stroke, she is the family’s sole provider. With a loan of $50 she started a food kiosk where she is making a profit of $4 per day. With an additional loan of $100, she expanded her space by purchasing posts and polythene, as well as some chairs and a table.


As she paid off her second loan in only two months, she is now asking for a third loan of $200 so that she can put up a tin roof and add more seats and tables for her customers.


The gentlemen peeling potatoes is her husband, determined to do whatever he can to make the business a success.


Sweet bread and tea will cost you … wait for it …. Waaaaaaait … fifteen cents! 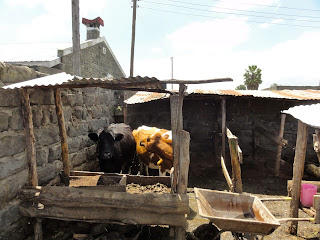 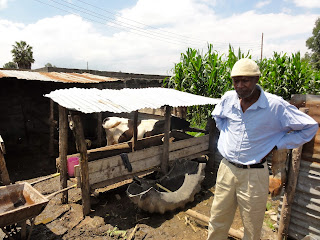 Florence Waithaka is a dairy farmer. The income from milk sales has supported her in educating her children and for meeting her family’s basic needs.
Currently she has 3 cows that are in calf: in the next two months they will be calving down. Each of these cows produces around 5 gallons of milk per day. With the profits she is able to generate, she can meet all of her family’s basic needs.
But she wants more than her basic needs met. She wants to prosper.
Toward this end, she approached FSK for a loan of $200 so she can start a poultry business. I have no doubt that this lady will be soon graduating from “Barely Surviving” to “Prospering,” in the near future. (Florence was off working elsewhere, so I was only able to take a pic of her husband, who helps manage the dairy business.) 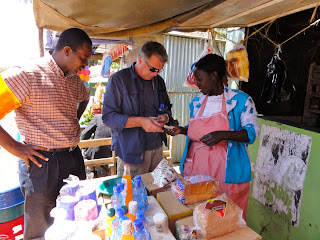 Due to post-election violence of 2007, Mary Munjiru was forced to resettle in Kiammunyi. She took a loan of $50 and bought 20 indigenous chickens. Over time, the flock increased to fifty.  She sold them each at an average cost of $4-5. Through the profits she earned, she started a Kiosk outside the Nakuru General Hospital. Since the poultry project does not require much of her time, she spends most of the day at the Kiosk. She earns at least $8 per day from the Kiosk business.
The man in the photo with me is Amos Manyara, Executive Director of FSK. I have been working in Sub-Saharan Africa for over 20 years and can say without equivocation that this man is a rare gift: educated, wise, a nuclear powered work ethic, compassionate and generous. (Come to think of it. Amos would be a rare gift anywhere else in the world!)
Amos could be here in the States making his fortune. Of this, I have no doubt. Yet he chooses to serve his community, doing everything in his power to help create a middle class of people who are determined to turn poverty into prosperity, and to be lights shining in darkness. In other words, people like him. Amos is not simply a project partner. He is a friend. 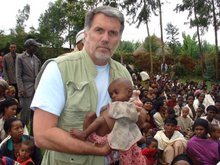 Caring for Children in Ethiopia 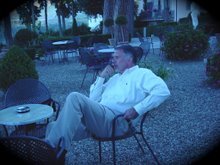 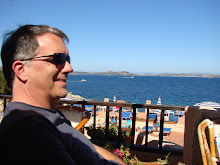 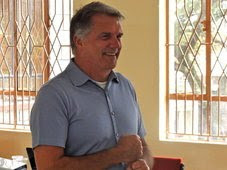